GCB issues statement over fire outbreak at its Kisseiman branch

The Registrar General, Jemima Oware, is set to have a meeting with customers of some six defunct fund management companies tomorrow, March 11, 2021.

The meeting which is the first for this year will be held virtually.

Dubbed Virtual First Creditors meeting, the session will be from 9:00 am to 3:30 pm on the said day.

A statement signed by the Registrar General also announced a separate meeting with investors of the six collapsed firms slated for March 12, 2021. 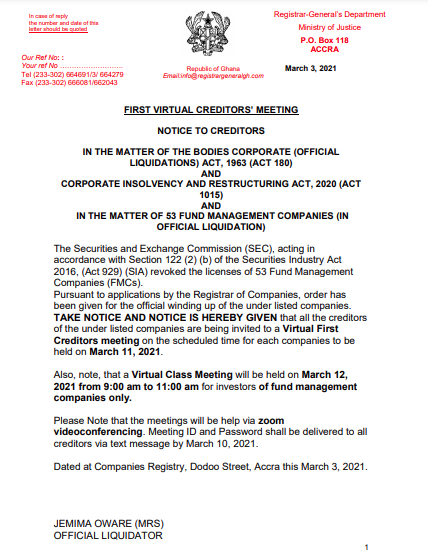 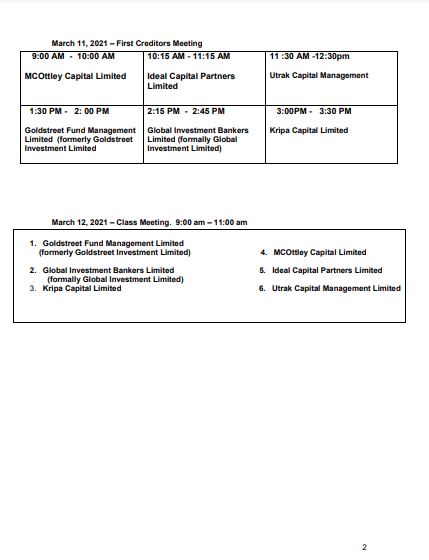 The Securities and Exchange Commission in November 2019 revoked the licences of 53 Fund Management Companies following the companies’ failure to “return client funds which remain locked up and in a number of cases, have even folded up their operations.”

This action was part of measures to clean up the financial sector of the country and was taken pursuant to Section 122 (2) (b) of the Securities Industry Act, 2019 (Act 929) which authorizes SEC to revoke the license of a market operator under some circumstances.

The government subsequently announced bailout packages for the affected clients.

The Registrar General held several meetings with creditors and investors of the defunct companies in 2020 sensitising them on measures put in place to access their locked up cash.

Jemima Oware, last week said her outfit was awaiting more winding down orders from the court assigned to handling the liquidation cases for fund management, before making more payment to customers whose funds have been locked-up.

Giving updates on the payment process, Mrs. Oware, in an interaction with Citi Business News, said she was waiting on the court to decide the next line of action, which will include holding more creditor meetings.

“For our end, we have finished our bit of class and creditor meetings, which was done at the end of last year. This year, we haven’t held any yet. I am waiting for a few more orders from the court. Once I get that, then I’ll have another round of creditor and class meetings.”

“But the government gave out a partial bailout package to all those companies that have not as yet received orders to wind them up. At least they’ve gotten a partial bailout of GHS50,000. That is currently ongoing. That is why there is a bit of calm on that front. But I’ll definitely be having a round of meetings again.”

The Managing Director of the Bank of Africa, Kobby Andah, has said the implementation of …