Organised’s Labour is calling on the Ghana Revenue Authority (GRA) to desist from recruiting young graduates to the position of Chief Revenue Officers (CROs) and Assistant Commissioners (ACs) of the Authority.

According to them, most of the young graduates lack the qualification requirements and years of experience required for one to merit such ranks in the Authority.

In a statement issued by Organised Labour, Chairman of the Ghana Revenue Authority Workers’ Union (GRAWU) and the Public Services Workers’ Union (PSWU), George Amadu Awinbilla, noted that most of the newly recruited officers are or were juniors and colleagues to officers currently on the Chief Revenue Officers (CROs) grade thus the need to desist from the practice.

“Organised Labour’s attention has been drawn to ongoing recruitment of young graduates into the Ghana Revenue Authority’s position of Chief Revenue Officers and Assistant Commissioners. While recognizing Management’s right to employ, we also wish to remind same of the qualification requirements and years of experience required for one to merit such ranks in the Authority,” the statement noted.

The statement further explained that, “Sadly enough, most of these newly recruited officers are or were juniors and colleagues to officers currently on the SRO grades. Lack of vacancies clauses have over the years been used by management to deprive qualified and hardworking officers into the positions of CROs and ACs yet less experienced or qualified ‘external persons’ could be employed to occupy such enviable positions.”

Organised Labour therefore demanded to see the criteria and requirements used for employing and ranking these newly employed CROs and ACs.

“Until such transparency is accorded Organised Labour, we cannot guarantee the co-operation and support of staff to these new management appointees as these discretional procedures has the potential to derail, succession planning, demoralize staff and most importantly, ‘open the gates’ for successive managements to continue using this occurrence as an example,” the statement further noted.

Find below the full statement: 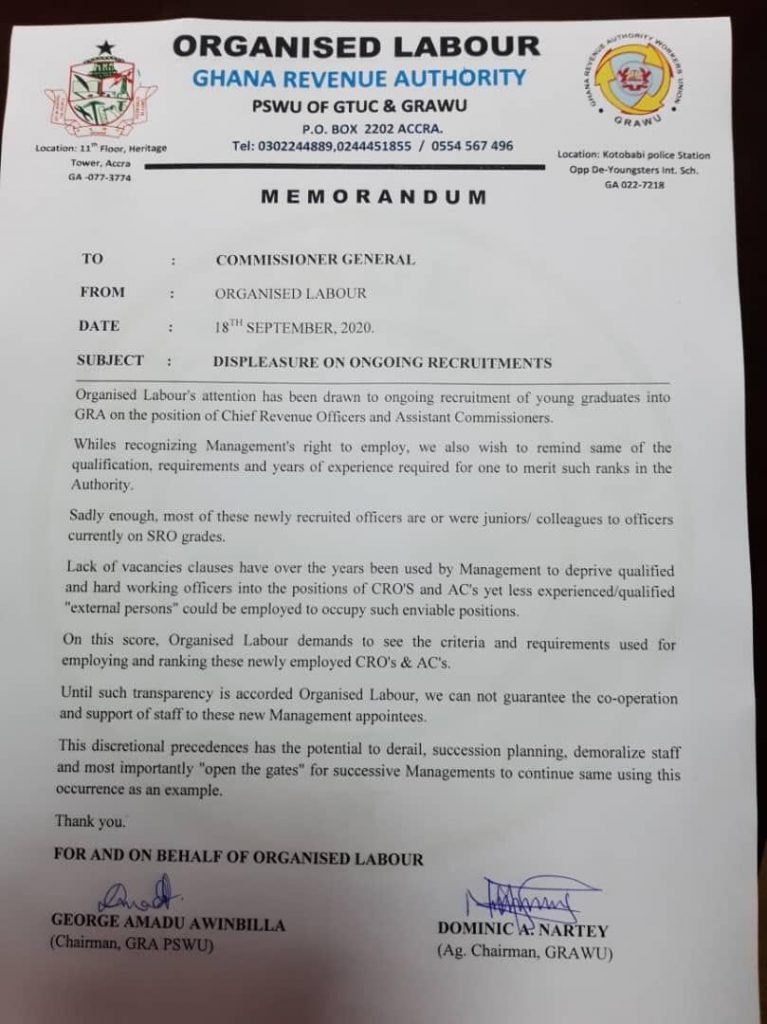